Odawara Art Foundation is pleased to welcome Christian Marclay, who will stage the sound performance “Found in Odawara” as the second event in the Contemporary Art Project series at Enoura Observatory launched in 2019.

Christian Marclay burst onto the scene in the late 1970s as a pioneering experimental turntablist, using turntables and records as interactive musical instruments, and since the 1990s has presented conceptual works applying collage techniques to various materials including sound. In recent years, he has carried out projects in Venice, Italy and Huddersfield, UK incorporating sounds produced by everyday objects. Found in Odawara will consist of two days of improvisational music, featuring Marclay and five other musicians and performers, at Enoura Observatory established by contemporary artist Hiroshi Sugimoto.

・Reservations are required to enter Enoura Observatory. Reservations can be made through Book Your Visit page from October 29. 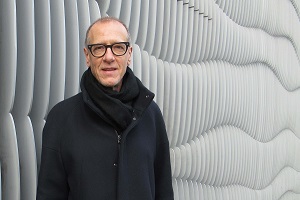 Photo by The Daily Eye

Christian Marclay was born in California, USA in 1955, and was raised in Geneva, Switzerland. He received his Bachelor of Fine Arts from the Massachusetts College of Art in Boston, and continued his studies at Cooper Union in New York. Long based in Manhattan, in recent years he has been living in London. In 1979 Marclay presented his first performance using turntables, and quickly gained recognition as an important figure in experimental music for his pioneering approach to records as interactive musical instruments. In addition to improvisational performances, since the 1980s he has been known for his artworks exploring the connections between sight and sound.
At the 54th Venice Biennale (2011), Marclay was recognized as the best artist in the official exhibition, winning the Golden Lion for his work The Clock (2010). He has presented solo exhibitions at major museums throughout the world such as the Los Angeles County Museum of Art (Los Angeles, California, USA, 2019), Barcelona Museum of Contemporary Art (Barcelona, Spain, 2019), Aargauer Kunsthaus (Aarau, Switzerland, 2015), Whitney Museum of American Art (New York, USA, 2010), in addition to releasing several albums such as Record Without a Cover (1985), More Encores (1988) and Records (1997). He has performed and recorded with numerous musicians including John Zorn, Elliott Sharp, Sonic Youth, Fred Frith, Steve Beresford, Okkyung Lee, and Otomo Yoshihide.